I owned a Barbie doll (and a cosmetics’ Barbie head) in the 1970s but to my mind, she struck me as somewhat vague.

A million abandoned career choices and a superfluous boyfriend later,  she still came across as nothing more than a clothes horse with impossible limbs. I wanted more.

I wanted a smart, sassy little superspy with a mod bob, a motorcycle, a machine gun and a passport to adventure. Mary Quant – she of the mini skirt empire – read my very mind and through her company, Daisy launched Havoc – Secret Agent Doll in 1974.

A Girl in a Million

I first saw the bright pink box in a toy shop in Poole and fell in love on the spot. Several weeks of birthday and pocket money later I bought her and an add-on safari adventure complete with a rubber snake and tropical suit. The motorcycle followed soon after and thus began my childhood love affair.

She was a fully articulated, 9″ tall doll that used the same face mold as Quant’s main doll, called Daisy after her company, and came with an extensive series of adventure packs, each one with clothes, accessories, props, and a mission booklet.

Although the line didn’t last long – Model Toys Ltd. stopped manufacturing Havoc around 1976 – the kits and doll appeared with a different face and artwork to coincide with Angie Dickinson’s character, Pepper Anderson, in the US detective series Police Woman.

As I researched this article, I realized how many of the packs I’d actually forgotten about, as well as how many I owned – that must have taken some real pocket money control on my part! 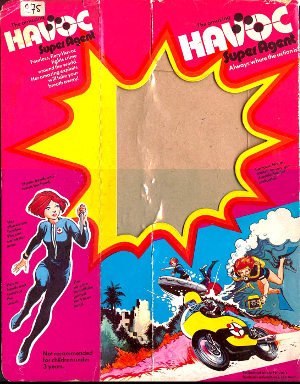 Havoc didn’t seem to have a “real world” name – presumably to keep her cover secure – but she worked as a top newspaper reporter for the Daily News, and came with a fab little identity card.

Her arch nemesis was Dr. Grizzle of S.M.O.G.G. – Spying, Murder, Outrage, and Gold-Grabbing. How fabulous is that acronym? Of the various kits, I owned:

I would seriously be more than happy to get a full-size human version of her fantastic pink logo t-shirt tho!