You would think that one career in a lifetime would suffice and anything else is just plain greedy. 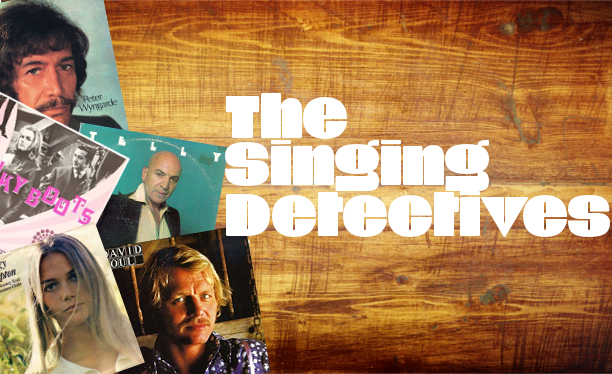 But you know those creative types – when they’re not busy pretending to be a crime fighter then they have enough time to delve head first into other artistic pursuits, hence the rash of thespians turned pop stars that we feature here, from the Swinging 60s through to the Androgynous 80s.

The main plot of 77 Sunset Strip (1958 – 1964) revolved around private detectives Stu Bailey (Efrem Zimbalist Jr) and Jeff Spencer (Roger Smith) but it was the hot rod driving, Beatnik living, rock and roll loving Gerald Lloyd “Kookie” Kookson III (Edd Byrnes) who stole the show. Every week he spoke hipster slang, combed his slicked back hair, and serenaded the cast with a pop ditty. His instant appeal led to the chart hit Kookie, Kookie (Lend Me Your Comb) which featured actress Connie Stevens, and kick-started the newly established Warner Brothers Records. An album, the titular Kookie followed, and Byrnes had his day in the pop sun.

While Edd Byrnes enjoyed his short-lived pop success, Patrick Macnee positively railed against his. In his long-running role as quasi-secret agent/detective John Steed in The Avengers (1961 – 1969), Macnee was paired with a number of female counterparts, most notably Diana Rigg as Emma Peel, and Honor Blackman as Dr Cathy Gale. It was the latter pairing which prompted the 1964 single Kinky Boots as an homage to the Swinging Sixties wardrobe of the show. The legend goes that Macnee was so aghast at the very notion of recording a “novelty song” that he rolled up to the studio blind-drunk and had no memory of the session. Kinky Boots didn’t initially set the charts on fire until a re-release in the 90s saw it rocket to the number 5 slot in the UK charts. So much for bad pennies!

Edward Woodward was another British actor with a slew of stage and screen credits in his portfolio when he made the gritty drama Callan (1967 – 1972). His measured and sonorous delivery seemed a perfect fit for record stardom and he recorded no less than twelve musical albums and three of poetry. 1970’s stand out album This Man Alone combines dark and poignant in equal measures and features a mind-blowing version of The Beatles’ Eleanor Rigby to boot. A must have for your collection.

And if you’re an actress who just happens to be married to one of the greatest composers, arrangers, and producers of all time, Quincy Jones, it naturally follows that you’re going to make an album – or in Peggy Lipton’s case the 1968 album Peggy Lipton which featured no less than three charted singles, two of them by legendary singer/songwriter Laura Nyro. Lipton starred as teenage ne’er-do-well turned police agent Julie Barnes in The Mod Squad and later starred in Twin Peaks – a somewhat less groovy and outta sight role but nevertheless an equally iconic one.

Bouffant-haired, swarthy, suave, and slightly saucy novelist turned sleuth Jason King featured in two series – first as part of a team of secret agents in Department S (1969 – 1970) and then as the titular Jason King (1971 – 1972). As befits an international playboy with a Gentleman Mod wardrobe, a Bentley, and a cellar of excellent wines, it followed that actor Peter Wyngarde should probably croon a few tunes in a light British fey pop style with his distinctive upper class purr. And 1970’s Peter Wyngarde (re-released as When Sex Leers Its Inquisitive Head in 1998) gained a cult following – but for all the very wrong reasons. Even a cover of The Attack’s Neville Thumbcatch can’t save the album from going back on the shelf, not because it’s downright weird (and it is) and not because it’s so of its time that it’s a bit creaky (and it most definitely is) but because it contains a track about serious sexual assault that is just downright offensive – one suspects that was true even in the 1970s as the album quickly faded into (temporary) obscurity. 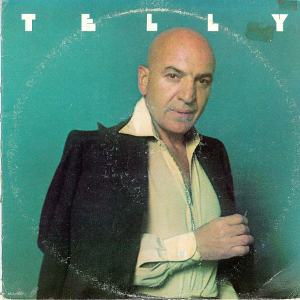 On the other hand, Telly Savalas knew how to treat the ladies well, although the part-Greek star of Kojak (1973 – 1978) was an unlikely TV sensation and sex symbol. Bald by choice since his movie role as Pontius Pilate in 1965 and a veteran of both the big and small screens he was in his early 50s when Kojak exploded. But his combination of New York moxie, his flirtatious nature and easy charm made women weak at the knees and his Kojak catchphrase “Who loves ya, baby?” sealed the deal. The next logical step was the charts, and he scored big with a UK #1 for his cover of Bread’s If in 1975 (he recorded six albums).

Dennis Waterman was a veteran of British horror before he turned to a TV life of crime – both on the right side of the law as George Carter in The Sweeney (1975 – 1978) (and later as Gerry Standing in New Tricks) and on the wrong side in as Terry McCann in Minder (1979 – 1989). He enjoyed a UK Top 3 hit with the affable theme song to Minder, I Could Be So Good For You, and then became something of a cult hero to a new TV audience when he was lampooned in the British comedy series Little Britain as a diminutive star who likes to “play the theme toon, sing the theme toon”.

David Soul performed the reverse of our actors-turned-singers, starting his career as a musician – the infamous “Covered Man”. Clad in a ski mask and dark clothes, Soul appeared on The Merv Griffin Show in the mid-60s but briefly gave up the singing when TV beckoned. A series of television roles followed until his starring role as Detective Ken “Hutch” Hutchinson in Starsky and Hutch (1975 – 1979) made him a star, alongside Paul Michael Glaser (himself a musical theatre veteran) as Dave Starsky. But the musical side of him refused to go away and for two years in the 70s he scored five UK Top 20 singles (both Don’t Give Up On Us and Silver Lady were #1 hits) and two UK Top 10 albums. International concert tours to hordes of screaming fans followed before Starsky and Hutch along with his musical career ended. He struggled with alcohol abuse for several decades after that before returning to stardom (and music) with the hugely successful Jerry Springer – The Opera in 2004.

Lewis Collins, like David Soul, performed the flip-around of musician turned actor. Collins drummed in various bands in his native Liverpool (mates with Paul McCartney’s brother Mike, he turned down an audition for The Beatles when Pete Best left) but abandoned the drums for bass guitar duty in The Mojos at the height of Beatlemania. When The Mojos failed to capitalise on their initial chart success he turned to acting – first on the stage, and then in the early 70s on TV in the sitcom The Cuckoo Waltz. But it was his role as Bodie in the British crime drama The Professionals (1977 – 1983) that fully propelled him to stardom. The Professionals was, in fact, Britain’s answer to Starsky and Hutch and Collins enjoyed the same kind of relaxed and natural on-screen relationship with his co-star Martin Shaw as Doyle.

We cannot talk about actors and pop careers without mentioning the legend that is William Shatner. Shatner, of course, gained fame as Captain Kirk aboard the Starship Enterprise in Star Trek but had a second bite of the TV cherry with his starring role as a police sergeant in TJ Hooker (1982 – 1986). 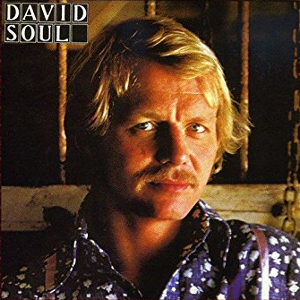 Shatner’s musical career is rather like Marmite, the ubiquitous British yeast-based sandwich spread – you either love it or you hate it, and those who love it are immensely passionate about it. His iconic staccato speech patterns, strange sing-song talking delivery, and Pinter-like pauses make for an interesting listening experience on 1968’s The Transformed Man, and his cover of Mr Tambourine Man really does have to be heard to be believed. Nevertheless, he gained a cult following which led to a raft of collaborators on 2004’s Has Been (Ben Folds is a frequent collaborator and producer) and numerous appearances and tours.

If you want to convey the essence of the 80s to a person of a younger generation you could do no worse than point them at any episode of Miami Vice (1984 – 1989). From the ice-cream pastel lavishness of the architecture through the Ferraris and the Lamborghinis and the Porsches to the co-star cop Sonny Crockett (as played by Don Johnson) with his casual slip-on shoes and his shades and his rolled up linen jacket sleeves, the whole thing breathes equal measures of 80s excess and 80s cool. Johnson was certainly no stranger to music either through high profile romances with muses Patti D’Arbanville and Pamela Des Barres and the diva herself Barbra Streisand to collaborations with Willie Nelson and the Allman Brothers. So it’s no surprise that he released two albums in the 1980s, and one of them produced a Billboard Hot 100 #5 hit in Heartbeat, making him one of the most successful of our Singing Detectives.

And finally we have Cybill Shepherd who managed to enjoy not one but three artistic careers – first as a model (where she was discovered by director and later partner Peter Bogdanovich), then as an actress (her debut performance was in Bogdanovich’s The Last Picture Show), and then jazz and erstwhile torch singer (although her debut album Cybill Does It… To Cole Porter had a rather unfortunate title). After giving up modelling for acting, and then watching her acting career slowly diminish as her relationship with Bogdonavich stumbled and fell, Shepherd came back with a vengeance in her starring role as model turned private detective Maddy Hayes on ABC’s Moonlighting (1985 – 1989) – alongside co-star Bruce Willis (as David Addison Jr) who also enjoyed a pop career of his own with 1987’s The Return of Bruno and later 1989’s If It Don’t Kill You, It Just Makes You Stronger. Both Shepherd and Willis toured – and Shepherd continues to tour.

2 thoughts on “The Singing Detectives”