In the middle of the 1988 movie I’m Gonna Git You Sucka! Keenan Ivory Wayans’ hero turns to Bernie Casey and asks why he has an orchestra following him around.

They’re my theme music. Every hero’s got to have some. 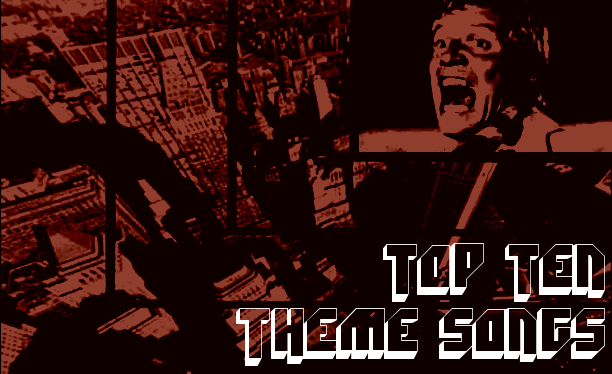 In no particular order, we present the Top Ten times when our hero(es) had one of the best theme songs ever written.

1.THE PERSUADERS (John Barry, 1971) – The man behind Bond supplied the haunting and somewhat bombastic theme for the TV pairing of Tony Curtis (as Danny Wilde) and Roger Moore (as Lord Brett Sinclair).

After a bar brawl during their first meeting in the South of France, the pair faces the choice of jail time or uniting to fight crime in a series of lavish international locations – complete with lavish international cars and lavish international females. Everything about the show, from the Cold War-tinged theme tune through the general derring-do, conveyed the notion of the lifestyles of the rich and famous.

It remains one of the best of the best theme songs – I used it as my mobile ringtone for a number of months!

2. OUR MAN FLINT (Jerry Goldsmith 1965) – James Coburn stars as Derek Flint both here and in the sequel In Like Flint (1967) as a multi-lingual, former Olympiad, world-renowned artist, multiple degree holding, suave, sophisticated spy.

Based on a series of books and comics, and created by Hal Fimberg, Flint is very much a 60s man with an endless stream of female companions and admirers, groovy Carnaby Street threads, a wild bachelor pad, gadgets galore, and the typical aloof demeanour of the time with a healthy nod towards camp.

The keen-eared will notice that the telephone ringtone used in both the theme and throughout the movies gets an affectionate nod in the Austin Powers franchise – Our Man Flint is Powers’ favourite movie of all time. There’s also a nod in Procol Harum’s Pandora’s Box which first appeared as a 1967 instrumental.

3. THE SWEENEY (Harry South 1975) – The soundtrack to The Sweeney TV series featured some of the cream of British session men and composers – names like Johnny Hawksworth, Brian Bennett, Keith Mansfield, and Simon Park (here credited as Simon Haseley) and form what became known as Brit Funk.

Born out of a one-off TV drama, Regan, the show centres around Jack Regan and George Carter, a pair of hard-drinking, womanising London coppers who work hard, live hard, and play by their own rules.

Named after the Cockney rhyming slang for the Flying Squad – a specialist division of London’s police – the show was both praised for its realism – previous British cops shows shied away from any notion of violence, failure, or corruption within the force – and criticised for the very same thing. It was a far cry from the cosy tea time reality of Dixon of Dock Green and the strident and deeply funky theme tune reflected that.

4. THE ROCKFORD FILES (Mike Post & Pete Carpenter 1974) – LA-based private investigator Jim Rockford starts off as most beleaguered TV anti-heroes do – cursed with the conviction for a crime he didn’t commit.

But what made The Rockford Files so different from all the other detective and ex-con tales on television was how immensely likeable actor James Garner made our titular PI.

The theme tune reflects that in a great slice of quasi-honky tonk with a driving yet cheerful melody. Generations later it still brings a smile to my face and recalls fond memories of the somewhat tousled, definitely rugged, but nevertheless goofy gumshoe that was Jim Rockford. Mike Post enjoyed a successful career in television music, notably with the theme to Hill Street Blues, another out of the box cop creation.

5.MISSION IMPOSSIBLE (Lalo Schifrin 1966) – Lalo Schifrin was no stranger to the eerie Cold War overtones of the hammered dulcimer, which he used to great effect in The Danube Incident from the Bullitt soundtrack.

With Mission Impossible he eschews subtlety in favour of all-out bombast.

Anyone who’s ever attempted anything even remotely difficult from running to catch a bus to opening a jar of pickles has underscored the action with this theme. It’s become so iconic and so indicative of effort that you’d be hard pressed to remember the plot line. But Peter Graves, Martin Landau, Barbara Bain, and more were a team of secret agents tasked with covert, missions against dictators and warlords – and not a pickle jar between them.

6.SHAFT (Isaac Hayes 1971) – Not the best blaxploitation soundtrack (that honour goes to Curtis Mayfield’s Superfly) Shaft still manages to combine the hot buttered soul of Isaac Hayes with the leather-clad cool of Richard Rowntree to give us this most iconic of theme songs. 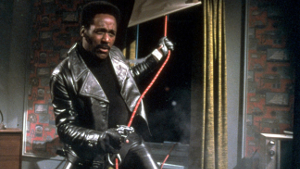 The vision of Isaac Hayes clad in gold chain mail vest and emerging from behind an organ on national TV is etched in many a memory.

The song itself has one of those slow-burning introductions.

Then layer upon layer of out and out funk builds to the legendary staccato crescendo and often-quoted lyrics about a black private dick who’s a sex machine to all the chicks.

7.HAWAII FIVE O (Morton Stevens 1968) – Set against the lush tropical backdrop of the island of Hawaii (America’s 50th state, hence the Five O of the title) we get a suitable surf-tinged theme song.

Every week Steve McGarrett’s special operations force battled crime in paradise, and every week we got the famous quote to “book ’em, Dan-O!”.

There were two commercially released versions with lyrics – one by Don Ho (You Can Come With Me) and another by Sammy Davis Jnr. (You Can Count on Me). The latter became a massive crowd favourite in the Northern Soul dance clubs in Britain, and was actually the first record I ever DJed with on the radio, so it has a very special place in my heart!

The jaunty little Laurie Johnson theme has more than a nod to the Carry On… series about it, and despite the bevy of beautiful women, exotic and far-flung locations, and heady playboy lifestyle, King was a terribly camp chap.

With his uber bouffant hairdo, flamboyant cravats and scarves, and debonair Carnaby Street man-about-town wardrobe, Jason King came across as the rather louche and somewhat fey chap as portrayed by Charles Hawtrey throughout the Carry Ons who displayed an indeterminate sexuality despite ogling all the young girls surrounding him. Whether by accident or design Laurie Johnson captures just that.

9.JAMES BOND (Monty Norman 1962) – And then there’s Bond. James Bond. Spy of all spies and real-life author of a humble little book about native birds (the feathered ones) that caught Ian Fleming’s eye on holiday in the Caribbean. If you ask anyone in the world to hum the Bond theme, they can without hesitation, and that to me is the mark of the perfect tune.

Everyone also falls prey to the myth that John Barry composed the iconic Bond theme. In fact, the composer credit goes to Monty Norman, with John Barry acting as an arranger for Dr No before he then went on to compose the subsequent themes. But it’s that legendary, dark and brooding climb by the orchestra which features as a motif throughout all the great Bond themes that followed, and it sums up the 60s secret agent perfectly – a hint of menace, a display of raw masculinity, the expanse of the jet set.

Above and beyond the main theme, my two other favourites are On Her Majesty’s Secret Service (from the film which comes as close to being the perfect Bond film as possible, the absence of Sean Connery notwithstanding) and Casino Royale (the late 60s version) which, although not officially part of the canon, gives us the twin Gods of Easy in the form of Burt Bacharach and Herb Alpert – and it doesn’t get better than that..

This lighter musical tone went better with the bromance tinged show that explored male friendship alongside the procedural police action. (Towards the end of its tenure, in fact, Starsky and Hutch became derided for its almost homo-erotic tone and reliance on Dave and Ken’s back stories and touchy-feely relationship.)