A fan favourite within the horror community and with several scenes which have been homaged, ripped-off and/or stolen subsequently by more well-known films and filmmakers, Messiah of Evil is an influential and strange film on many levels. 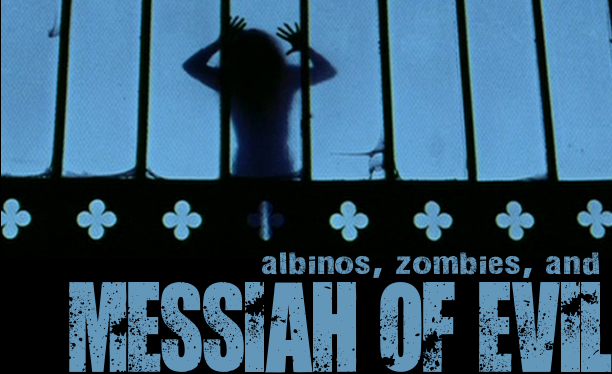 Husband and wife team Willard Huyck and Gloria Katz made the film in 1973 and then went on to greater success with the screenplays for American Graffiti and Indian Jones and the Temple of Doom.

They were also responsible in part for Howard the Duck, so…

Tonally, it shares the tropes and limitations of many American horror films that were made in the early 1970s (gory in places but made with the contents of the penny jar in momma’s bedroom so the execution isn’t all that they would have wished for in places due to cost and time restraints) but in part, it is also a distant cousin to the Italian Giallo films of the time.

Which means, it has arty ambitions (art as a visual motif plays a large part in the film particularly a house which is key to the plot), and the camera occasional frames the action in an unusual way. Fundamentally however at its core, it’s a cross between a zombie and a supernatural terror film.

As with many budget films of the era, (where the filmmakers have saved money, helped an aspiring musician friend or couldn’t be bothered generally), the film starts with a theme song which is incongruous and frankly crap. It’s called Hold on to Love. If you like twee, female balladry of a substandard quality you might derive aural delight from this ditty, but you should be concerned with your lack of taste if you do. The main soundtrack by Phillan Bishop is a weird, off-kilter electronic one which works well in the main.

Without giving too much of the plot away (at least for now), the film is told in flashback and a lot of voiceovers, so you’ve been warned if a disembodied voice setting the scene or general context isn’t for you.

Our heroine, Arletty (Marianna Hill), is going to see her father who has been sending her letters detailing his descent into delirium and ultimately madness. But he pleads with her not to visit him. So she sets off to see him in the dead of night and the weirdness starts. Albinos, zombies and the Portuguese abound and as a consequence of this, she ends her days in the Asylum. The film tells her story in flashback.

Besides Arletty, the three main other characters are Thom (Michael Greer), Laura (Anitra Ford), and Toni (Joy Bang). Whilst not expecting the two female characters to be much more than plot devices, they are just that. Laura is the nominal girlfriend and Toni, the ditsy teen/stoner companion. They are like a boiled down version of Scooby Doo and the gang.

Laura meets her end as a result of visiting the local supermarket which was holding a zombie dating night after escaping a murderous albino with a penchant for eating rodents after thumbing a lift. Toni ends her days being the hot butter for the undead’s popcorn at the cinema. For reference, zombies like highlights of Westerns, particular those starring Sammy Davis Jr. Who knew?!

The moral of the above two events is; check whether your local supermarket is holding a dating night for zombies before venturing out and if the cinema is only charging 50 cents to see a movie, your fellow cinema-goers might leave a lot to be desired in the living dead stakes. Life lessons for us all surely?

Did I enjoy the film?

Yes and no. Its strangeness in terms of tone and visuals gives it a feel which is a gritty mix of part grindhouse American meets Italian Giallo. It’s a side order of linguini with rib eye steak to go, hold the mustard. The three main set pieces of the film, the supermarket, the cinema and the attack on the house are genuinely creepy/foreboding and have influenced genre filmmakers accordingly.

As with many budget horror films, it’s 10 minutes too long and a heavy reliance on voiceover starts to grate quickly but if you like early 1970s horror which errs on the weird side go see it.

I give it 7/10 (1/2 point removed for the aural atrocities committed by the theme song).