Imagine, if you will, a relaxed and groovy conversation, taking place in a relaxed and groovy setting. We’re in a space-age pod pad overlooking Laurel Canyon circa White Hot Sixties. The air is gently perfumed with the scent of Jet Set. Ice cubes clink provocatively. The rug is shag pile. Life is cool.

Burt Bacharach, who provides the musical backdrop to a thousand effortless lounge lives addresses Hal David, who writes the accompanying easy breezy lyrics to this lifestyle.

“Dig this,” says Burt. “It’s Steve McQueen…” Hal nods. “And wild, crazy teenage ravers.” Hal is cool, but digging it. “And about half a tonne of Jello. From outer space. Are you hip to that?”

Hal pauses briefly, adjusts his black sunglasses, smooths down his slacks, and sits up in the bean bag.

And so it came to pass that Burt was forced to bypass the yearning sigh of Do You Know the Way to San Jose and forsake the poignant élan of A House is Not a Home, and indeed give up altogether on the style of Walk on By for the contribution of Hal’s brother Mack.

Remember him? No? Me neither.

Mack was apparently unfazed by Jello, rampaging or otherwise and set the movie world alight with a cornucopia of wowness that consisted entirely of:

Beware of the blob, it creeps
And leaps and glides and slides
Across the floor
Right through the door
And all around the wall
A splotch, a blotch
Be careful of the blob 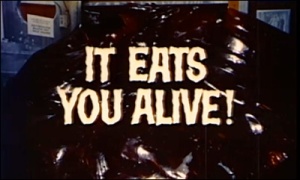 Steve and Jane watch a meteor crash to earth, as you do, and witness it chowing down on a generic old timer. The hungry blob then consumes the town doctor, a mechanic, a projectionist, and several cinema goers. The townspeople laugh. “What nonsense!” they cry. “Jello from Outer Space? We’re with Hal David on this one, baby!”

Our intrepid teens retreat to Diner Americana, pursued by the Hungry, Hungry Jello, the derisive laughter of the people ringing in their ears. There are a fire extinguisher and a walk-in freezer and so on and the blob is defeated, of course, and we heave collective sighs of relief, but then…

Beware of the blob, it creeps
And leaps and glides and slides
Across the floor…

The swingin’ ditty is credited to The Five Blobs (actually Bernie Knee playing with the overdub button, presumably out of sheer desperation). It was not a hit. Its lasting legacy was no doubt that almost imperceptible moment, oh somewhere around 4 am when the Martinis were starting to wear off when Hal would give Burt a look and Burt would turn the stereo up and the guests would make embarrassed apologies and hail taxis.

Because the blob is both a splotch and a blotch. That’s lyrical genius right there, man.