It’s the tang of chrome dials on a slick expanse of smooth white plastic, offset with the most burnt of orange textiles and the deepest darkest hints of chocolates and mochas. Wide vistas of glass butt against soft shag pile and endless shiny corridors of gleaming space-age style. Sensuous curves, sharp angles, glossy surfaces, and molten metals make this the very essence of the future.

But we’re not looking at the actual bridge of Moon Base Alpha or its quarters and byways. 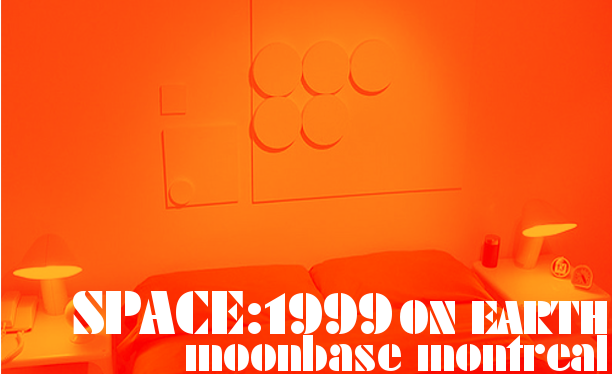 This is the world of Catherine Bujold – a passionate fan of Space: 1999 who has transformed her entire Montreal apartment via a painstaking labour of love into Moon Base Alpha on earth.

Her journey began 19 years ago when a friend spotted a Sorella lamp at a house and bought it for her on the spot. Catherine laughs: “I had already told all my friends that if they ever came across that lamp to let me know. I will spare you the happy dance I did…I think it equals Barbara Bain’s performance in Full Circle!”

The Sorella table lamp was a highly sought after piece by collectors for decades.

A leaning, biomorphic object in brilliant white with linear vents and a large, sculptural hooded shade, it was originally designed by Harvey-Guzzini in 1972 as a child’s lamp. Harvey, named after the eponymous rabbit from the James Stewart film, branched into space age plastic lighting at the end of the 60s after a decade producing enamelled copper objects. Eagle-eyed Bond fans can also spot it in Moonraker (1979), and it proved so popular that it went back into production in 2011.

But, as she continues, “I enjoy every single piece for different reasons. The Ribbon Chair by Pierre Paulin for Artifort is certainly a close second. It’s more a sculpture than a piece of furniture. It was bought brand new so it’s in perfect condition.”

Catherine’s passion for the show began in August 1975, and the first advert on Canadian TV for a brand new Gerry Anderson live action show – Space: 1999.

“I was blown away just like the moon in the series,” she says. “I couldn’t believe my eyes – a world beyond belief! This was the perfect world, as simple as that.”

Even then, she was already captivated by space age design.

“My passion for modern design furniture goes back to my childhood.” She smiles. “I first went to the Expo 1967 World Fair in Montreal in the summer and fall. How beautiful the future would look according to that exposition.”

The 900 acre International and Universal Exposition is generally considered to be the most successful World’s Fair of the 20th century. Spanning six months, 62 nations took part, and over half a million visitors went through the turnstiles in a single day.

Themed as Man and His World after the 1939 Antoine de Saint-Exupery book, organisers of Expo ’67 chose an encompassing passage from the book to set the tone and one that would come to almost echo the later feel of Moon Base Alpha.

in truth, being made aware of our own solitude can give us insight into the solitude of others. It can even cause us to gravitate towards one another as if to lessen our distress. Without this inevitable solitude, would there be any fusion at all, any tenderness between human beings

It was the France Pavilion that particularly caught her eye.

“In there you could see the newest furniture designs with a lot of Oliver Mourgue (the Red Djiin chair that later featured in 2001: A Space Odyssey) and the fabulous chairs of Pierre Paulin – like the Ribbon chair as seen in Space: 1999. All those pure and bold forms, beautiful and intriguing shapes were totally new at the time, but somehow, I felt totally at home surrounded by them.”

She continues: “It didn’t take more for me to be under the spell of the absolute beauty of foam, moulded plastic, and modular furniture. I could relate to this furniture so much: it was like I had just found my true identity. I was ready for the future and… I waited…”

When Neil Armstrong historically took man’s first steps on the moon two years later, it only increased her fervour. She smiles again. “How exciting it was to watch the future happening on TV in front of our eyes. How lovely it would have been to live on the Moon, I thought.”

And then the moment when she watched Space: 1999 for the first time when the memories of the décor and furnishings from Expo ’67, and a life on the moon came flooding back.

The aesthetics of the show completely captivated her imagination. “I’ve always loved the space age style, and Space: 1999 is certainly the tv show that depicts that style to a level never seen before or after it.”

Catherine also has a passion for and a fascination with numerals.

“I’ve always loved anything related to time – calendars, clocks, watches… – and I love numbers. September 13th, 1999. A not so distant future. It’s like it would have been tailor-made for me.”

In fact, Space: 1999 occupies that “not so distant future” trend in design aesthetics known as Retro-futurism.

Retro-futurism can be seen in the films of Stanley Kubrick, the white hot 60s space age mod fashions of Andre Courreges and Pierre Cardin, and the writings of H.G. Wells and Jules Verne. Quite simply, it’s the longing for a future that never was and never will be, blending the stylistic trends of the present day coupled with the burgeoning technology of the time.

Modern films such as Sky Captain and the World of Tomorrow and The Rocketeer also have that sensibility of the future set in the past. Space: 1999 is a hyper-reality of the 1970s in the future. It certainly taps into a common thread in the 70s decade of a distrust and dissatisfaction with modern life and its faster pace and political unrest.

There is no corruption, decay, or uncertainty in a clean white palette and sleek furnishings. Space: 1999 designer Keith Wilson touched on this in his 1996 interview with FAB Magazine: “My original concept for Space was to take out as much colour as possible. It was a clinical, controlled environment.”

Wilson was a long time collaborator with Gerry Anderson. He joined A. P. Films in 1961, working on Fireball XL5, Stingray, Thunderbirds, Captain Scarlet and the Mysterons, UFO, and Thunderbirds Are Go.

In fact, his total contribution to Space: 1999 is massive and highly influential, with production credits that include:

And Catherine has been determined to pursue that vision. “Since I always wanted to live in the perfect future that we saw in Space: 1999, having my house furnished with all the space-age furniture seen on it was the only way to go.”

From Dream to Reality

“Of course the Sorella lamp was the first piece of furniture that caught my attention on the show and the minute I saw it I started to dream having them all over my house.”

Initially, she believed that the sets and props were purpose-built for the show and not available to the general public, rather than acquired by Wilson and his team from warehouses and outlets specialising in cutting-edge modern furniture. The pre-Internet days meant that her search was painstaking and dedicated.

“The Unibloc 4 and the floor and table versions of the Lucciola lamp were very rare. And the Unibloc 4, due to its size, weight and so on cost the price of a car since it had to be shipped from France to Canada. Add to this the customs fees and various taxes and you have a pretty expensive bill. But it was all worth it.”

“It’s been a work of almost 20 years, and I’ve spent over $100,000 on it to date. You have to add to the price of the furniture itself the shipping, taxes, duty fees, etc… Many pieces were paid at the highest price if not more to furniture dealers that unfortunately know the value and rarity of these pieces. It would be impossible to get my money back if I wanted to sell this collection.”

She laughs again. “Don’t worry! I don’t have any intention of selling it!”

Her vintage hunting has certainly slowed down in recent years, but not stopped altogether. “I’m starting to have less space in my house to put it,” she says. “And since I hate cluttered spaces, I have to stop myself from going too far.”

She’s still trying to locate is the arc lamp from which Anton Zorec drains his energy. Without any clue as to the exact name of the piece or its manufacturer it currently eludes her. She displays furniture and pieces on a rotational basis due to space constraints, putting furniture where it fits and suits for the time being.

“I’m still waiting to open up the space to go all out with this project in order to have a real – or as close as possible – Alphan look.”

And finally, she has a word of advice for like-minded fans.

Don’t let people around you tell you that something is too crazy. Follow your passions! Recreate the future as we envisioned it in the past – let moulded plastic be the shape of things to come!

You can follow Catherine’s progress with her wonderful Montreal flat over on her Facebook page where she has lots more fabulous pictures and references: https://www.facebook.com/catherinebujold.sorellarium