On a Spring day in 1972 in Spain, actor George Sanders committed suicide. The demonic butler Shadwell in Psychomania (1971) stands as his last screen role.

The naughtier minds among you might think that the two facts connect. Lead actor Nicky Henson, who plays biker, Tom, dismissed the film as “complete shit”. The film’s massive cult audience believe otherwise. “Tom – you’ve got to BELIEVE!” pleads Beryl Reid (as Tom’s spiritualist mum, Mrs Latham) as the film unfolds, and we do.

Psychomania tells the story of rowdy bike gang The Living Dead. They hang out in graveyards, play awful hippie music on guitars, and terrorise Random Village, UK. I use the term terrorise with my tongue wedged in my cheek – they careen through supermarkets and knock over tinned goods, poke their tongues out at various truck drivers, and grumble a lot.

But just when you decide that all they need is a good smack on the bottom, the film’s real agenda kicks in. Because Tom wants more than motorcycles, and Mrs Latham does more than conduct séances. The secret lies in a locked room and a shadowed vision of contracts with the Devil.

Beryl Reid worships Satan! Hurray!! (As you do.)

So Tom must kill himself, and at the point of death believe with every fibre of his being that he will come back immortal and untouchable. Simple, no?

(I hear the naughtier minds among you kick in at this point. “So George Sanders killed himself, you say? Hmmm.” Slow down, children.)

Tom roars off a bridge on his bike and offs himself. Cue hippie music and daisy chains. “We want to bury Tom our way,” say The Living Dead because all bike gangs love a good daisy chain. And then by sheer arrogance, Tom roars back to life, still on his bike, and murders a whole pub full of people. Dagnammit, it worked!

One by one the gang commit suicide and all but two come back to kill, maim, and threaten. One did not believe. The other is Tom’s drippy girlfriend Abby.

I interject here to give you all the flavour of Abby (played by Mary Larkin). 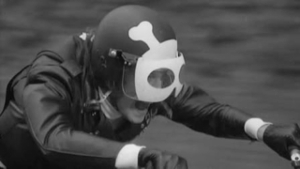 Tom consists of charisma, uniqueness, nerve, and talent. Clad from head to toe in leather, he exists on sheer insolence alone. The Living Dead boasts legendary sexpot Ann Michelle as Jane, a sassy little brunette who’s up for mayhem and without a doubt, puts out. Abby, on the other hand, warbles and wobbles and shakes through the entire movie with constant tears in her eyes. Somehow Tom remains devoted to her (instead of Jane) and wants nothing more than for her to join him in immortality. But Abby suffers from a medical condition – she does not possess a backbone.

So she stays alive, weeps a little, and then grasses them up to the police. There’s gratitude for you, my friends. (George Sanders continues to ponder death, and now you understand.)

Let’s recap, shall we? We witness Satanic pacts, willful suicide, immortality, first-degree murder. The Living Dead kill half the village, the entire police force, and several holidaymakers. And Beryl Reid bats for the Devil. Remember that.

Mum can take or leave the murder part. She isn’t down with the anarchy side of things, as teens will be teens after all. But when Abby’s pouty lower lip trembles and her eyes fill with salty regretful tears, well – enough is enough! Even Lucifer has a soft spot for the drips of this world.

Mrs Latham turns into a toad. The Living Dead become lumps pf rock. Abby continues to weep. I say this in a rapid style because it is so ridiculous, and so very random, that you just have to state the facts. It all comes down to toads and rocks in the end.

Shadwell drives up in a posh car, smiles at the scene, and drives off again.

Dear World, I am leaving because I am bored. I feel I have lived long enough. I am leaving you with your worries in this sweet cesspool. Good luck.

I like to think that he changed his mind at the last minute, and now roams the earth, immortal and life size. In the end, it all comes down to toads and rocks.