The human brain does not reach full maturity until the age of around 18. Add in hormones and body changes and this spells a recipe for disaster.

Consider the life of the average teenager then – emotions that turn on a dime, mood swings, things that sprout up and out all over the place, and the face which looks like a general plague area. Teenagers grunt, stomp, and act out. Blink and you’d consider them monsters. Given the explosion of the B-movie in the 1950s and beyond you can see why directors ran with the teenager as monster angle and produced a plethora of titles from Werewolf through to Frankenstein and all points in between.

I Was a Teenage Werewolf

Michael Landon – he of Little House on the Prairie, Bonanza, and Highway to Heaven fame – plays a surly borderline juvenile delinquent in 1957’s I Was a Teenage Werewolf. Gripped by hormones, at war with authority, he snarls and growls his way through high school – and that’s before he even transforms into a full lycanthrope.

Tony Rivers (Landon) fights a lot. He beats up a friend, the police arrive, concerned faces abound, and they refer him to a psychologist, Dr Brandon (Whit Bissell) who can hypnotise the bejesus out of him. So far so good, except that Bissell is, of course, a mad scientist, and he wants to use his new serum, of course, on bad boy Rivers. With the serum in his track and field body, our anti-hero goes berserk and becomes rather more hirsute than the average teen hunk.

A convenient high school janitor who just happens to hail from the Carpathian Mountains (of course) recognises a werewolf when he sees one, and mayhem ensues until Rivers’ sad demise when everyone reflects on the dangers of a man acting as God, a frequent theme in the horror genre.

“We DARE You To See The Most Amazing Pictures Of Our Time!” screamed the promotional ads (Werewolf ran as a double bill with Invasion of the Saucer Men). The Mad scientist wants to “hurl him back to his primitive state”, hence the serum called Pseudo-Science I Made This Up Big Words, and man’s alleged primitive state is apparently a werewolf, rather than say a caveman or indeed Frankenstein’s man-child Creature.

1957’s I Was a Teenage Frankenstein follows the same formula as Werewolf: borderline teenage delinquent meets mad scientist as primal and hormonal urges battle pseudo-science to the death. You can see a pattern emerge here, no?

Frankenstein acted as a semi-sequel to Werewolf, in fact – released just five months later as a double bill with Blood of Dracula (again AIP), and then Frankenstein-ed into an actual feature with Werewolf in 1958 as How to Make a Monster.

This time around Whit Bissell plays Professor Frankenstein, a mad scientist, only this time around he wants to play Meccano with body parts rather than rely on some yucky old serum made of goo and fish gills. It’s a progression of sorts. He just needs to find a suitable Californian hunk to practice his embroidery on.

Enter Gary Conway as an off-camera hot rod victim who somehow manages to die in an automobile fireball with his face melted and bulbous, and his jock body intact and pristine. We’ll gloss over that small detail. Frankenstein does what Frankenstein does best, and soon we have a reanimated teen complete with grunts, surly attitude, and full-on whining. His body is perfect. His face is a general plague area. Welcome to the teenage years, my friend.

The usual villagers with pitchforks and torches appear and mayhem ensues, but the premise remains the same. Dark hormonal impulses grip our teen. He acts out. The grown-ups win. And scene.

I Was a Teenage Caveman (released in 1958 as a double bill with How to Make a Monster. AIP seem to have the monopoly on Teen Horror here.) takes up the moody teen mantle and runs with it. Directed by Roger Corman, it features Robert Vaughn (aged 27) as a rebellious teenager in prehistoric times who encounters a nuclear man. Corman threw the kitchen sink at this one and managed to check all the box office B-movie boxes along the way: radiation, teens, horror, done. Again, we see anti-authority, rebellion, the usual grunts and stomps. Robert Vaughn declared it “the worst film ever made”, which is debatable, but he seems to have had a bad trip. Once again, the message comes through loud and clear – teenagers complain a lot and are full of hormones and parts of their body are either covered in boils or hair or both.

So what happens when the teenager in question hails from another planet? Teenagers from Outer Space (1959) is happy to answer your questions and concerns on that one.

Warner Brothers, who saw a niche and jumped on it, twisted the teen angst story a little bit. Director Tom Graeff (who also wrote, edited, produced, acted, did the cinematography, special effects, and provided the music coordination) goes down the seminal counter-culture route in Outer Space to give us the tale of an alien man crash landed on Earth with his capsule mates. The alien man, Derek (David Love) just isn’t into violence, man. He digs the humans and their dogs. He wants to find a pad and crash here – despite already crashing here. He is the softer, moodier, more introspective side of the teen – although no less whiny or petulant. 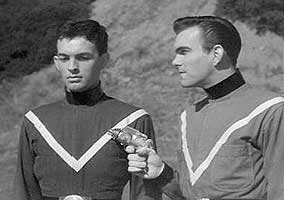 He is also a good ten years too old to play the part (as are all the other so-called “teens” in the movie) and approaches the whole thing in a very “I’m really bored but if I play it cool people will think I’m aloof and interesting” kind of way. The entire film was made on a meagre budget in a semi-guerrilla fashion. But it’s interesting that Graeff diverged from the hormonal Jock template and explored the other side of teen anti-establishment ennui with a more Beatnik flavour.

Derek turns out to be the planet leader’s son, so we have the very familiar Reactionary Father vs. Drop Out Son scenario all played against a backdrop of aliens not understanding humans and their violent, nasty ways. It’s certainly a portent of societal changes to come. As the landscape changed so too did the films with glimpses here and there of the Teen Horror Template – The Incredibly Strange Creatures (1964), for example, with the unresponsive and surly Beatnik anti-hero as Zombie. Teenage monsters became teenage serial killers with the rise of the slasher flick, but you can find occasional gems such as Zombie Prom (2006), which features RuPaul in a fabulous 50s B-movie parody.

What Have We Learned on the Show Tonight, Craig?

History cites the 1950s as the birth of the teenager. Prior to this you lived at home as a child, went to work at your father’s office after that or got married and had children, and then you became an adult. The in-between part didn’t exist. But the post-war era brought both social and economic change and a degree of freedom in how you lived your life. University became an option, as did your choice of job – which brought with it a disposable income. Teenagers were a thing.

But if you give teenagers money and cars and a voice, they’re going to start acting out, and boy did they ever act out. Alternative ways of living, demonstrations, marches, draft dodging, drug taking, a music and fashion explosion, a market voice. What is the prevailing entertainment industry going to do but cast them as crazy, mixed-up monsters – always battling against authority, always giving in to primal forces beyond their comprehension, always being downright weird.

The language of these movies is painful to hear: a middle-aged script writer’s notion of hip. You can sense the struggle to both demonise and understand, in a time when understanding was almost impossible in a world that was changing so fast and so irrevocably. When we don’t comprehend, we make monsters. When we really don’t comprehend, we make monster movies: all of them incredibly strange creatures.